TransLink.iQ Will Manage More Than 250,000 POS Terminals in Uzbekistan 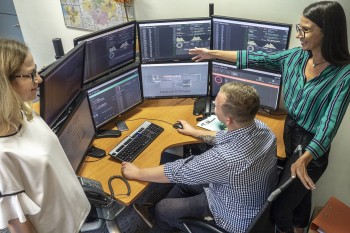 ASHBURN International, part of The Penki Kontinentai Group, specializing in solutions for managing and monitoring POS terminal networks, signed a long-term strategic partnership agreement with the Common Republican Processing Center (CRPC) of Uzbekistan. CRPC organizes the complex and goal-oriented movement of the modern bank information technologies in the financial market of Uzbekistan. Common Republican Processing Center is responsible for processing transactions. It controls the operation of more than 250,000 payment terminals. The agreement deals with the sale of licenses and implementation of the TransLink.iQ solution, which provides the real-time POS terminals management, functionality and software updates, safe transfer of financial transactions to bank hosts.

Within the framework of the signed agreement (which will be valid at least 10 years), ASHBURN International will install developed by the company software TransLink.iQ, adapted for the Uzbek market. An agreement also reaches on supply of the new POS terminals and the sale of more than 250,000 licenses for the managed by the CRPC POS terminals, owned by 28 Uzbek banks.

The Common Republican Processing Center predicts an increase in the number of payment terminals operating on the TransLink.iQ platform by more than 50,000 units per year.

"The Uzbek electronic payment market is developing at an extraordinary pace. There are about 22 million cards of the national payment system UZCARD, also of the Masterсard Worldwide, UnionPay International, etc., which we manage. The Processing Center introduces innovative solutions in Uzbekistan and ensures the highest quality of services. ASHBURN International was chosen as a partner not by chance. Its comprehensive solution is most consistent with the CRPC’s business development strategy. The wide functionality of the TransLink.iQ software provides the ability to process large data streams. Our partnership guarantees the stability and efficiency of the Uzbek banking sector development," said the CRPC General Director Akhror Makhmudov.

ASHBURN International Executive Director Žoržas Šarafanovičius accentuated that the contract negotiation was successful, because both sides had a similar vision of future cooperation and strategic goals. Different tests and experimental work on system integration were carried out during the project preparation, consequently an optimal solution, most suitable for the Uzbek market, was found.

"One of the TransLink.iQ key advantages is its wide functionality. Our software allow accepting payments made by all payment cards operating in Uzbekistan (UZCARD, Mastercard, etc.) or by loyalty cards. This option simplifies the work of the Common Republican Processing Center and trade organizations, which can accept payments from different payment systems through the one POS terminal. There will be no changes in the payment terminals work after the TransLink.iQ introduction, so it will be unnecessary to train the representatives of trade organizations additionally," says the ASHBURN International Executive Director.

Among the TransLink.iQ advantages is not only compatibility with POS terminals of different manufacturers, but also the ability to optimize business expenses, update software, real-time monitoring and remote POS terminals network management. The platform allows automating management of the cryptographic keys, fixing and reacting to possible acquiring networks failures. The TransLink.iQ solution meets the requirements of international payment systems, EMV and the highest PCI security standards, which guarantees the cardholder’s data protection.

The CRPC main objectives include targeted promotion of advanced banking information technologies and electronic payment instruments to the Uzbek financial market. It is also responsible for the processing for the nationwide UZCARD payment system, to which 28 banks are connected. The Common Republican Processing Center develops partnership with international financial institutions and settlement associations, world producers of innovative bank equipment.

The Azerbaijani state-owned bank Azer Turk Bank has purchased a TransLink.iQ solution for EFTPOS networks monitoring and managing, developed by ASHBURN International. The company also provided the bank with the..

Penki Kontinentai expresses gratitude to all socially responsible citizens, volunteers, and business representatives, who help physicians, the elderly and other vulnerable groups during the COVID-19 coronavirus..

The software solution for monitoring and managing EFTPOS-terminal networks TransLink.iQ will be the subject of a new study by Takhmasib Dadashev. Associate Professor of the Moscow Institute of Physics and Technology..

Ingenico, the world leader in payment terminal manufacturing, has invited its partners to the PayTech Summit in Barcelona